Old Aberdeen was once a separate burgh as granted by King James 1V in 1489. This is evident from the preserved ancient dwellings and cobbled streets, dating back to the middle ages. The old town's centre is dotted with 17th and 18th century architecture including Aberdeen University's King's College, Saint Machar's Cathedral, Saint Margaret's Chapel and Convent, Powis Gates, Brig o' Balgownie and  King's College Chapel which has been used for daily worship for over 500 years.

In 1891 an Act of Parliament incorporated Old Aberdeen into adjacent Aberdeen. It still remains part of Aberdeen City. The 14th century Brig o' Balgownie hamlet and surrounding areas remained largely undeveloped until the Aberdeen oil boom in the 1960s when more housing was needed in the area and developments like Tillydrone were built. The heart of Old Aberdeen remains a conservation area to preserve the historic buildings and unique architecture.

The Visitor Centre at King's College offers delicious food, coffee and home bakes and an interactive multi-media display to learn more about the Old Town and its history. 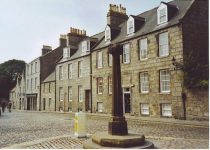